An interview with Maria Cesaro, author of a short animated film Paradox

Maria Cesaro is a young Italian graphic designer and animator based in Turin, Italy. She made her diploma short film Paradox (Paradosso, 2015) with Rocco Venanzi.

Lev Slivnik: You studied at the Polytechnic University of Turin (Italian: Politecnico di Torino). Where you also born there?

Maria Cesaro: Yes, I was born in Turin, I studied in Turin and I live in Turin. I’ve always been in Turin. I sometimes regret my decision of not studying abroad.

And what exactly did you study?

I studied graphic design, posters and logos in particular. I also have a passion for comic books and music. Because I was, and still am, interested in video, animation in particular, I decided to study animation at Centro Sperimentale di Cinematografia in Turin. Now I try to combine my two passions – graphic design and animation.

It is about how our lives would be like if plants grew faster than humans. It stresses out the role that plants have in our ecosystem. The film tries to present their importance but also expose the fact that none can live without each other.

Is it another bachelor’s degree or is it a master’s?

It’s another bachelor’s, I have two bachelor’s degrees.

What do you do now?

I own a small company, called Motore a creazione. We produce short videos for bigger communication agencies. I also make wedding invitations, I also made it for my own wedding.

Where you inspired by any animators or artists in general?

Yes, I was inspired by GIPI (Gianni Pacinotti), an Italian cartoonist, filmmaker and author.

How was it working with your co-director Rocco Venanzi, who came up with the idea for the film?

We are very different, but it was an interesting, constructive collaboration.

How would you describe the theme of the film?

The theme is a very strange, dystopic one. It is about a man, only one man, and plants. It is about how our lives would be like if plants grew faster than humans. It stresses out the role that plants have in our ecosystem. The film tries to present their importance but also expose the fact that none can live without each other. At the end of the film plants die because of the lack of nutrients.

Let’s talk about the technique you used. What was that like?

The film is drawn in classical 2D animation with 25 frames per second. It is a difficult technique, but I enjoyed it a lot. Rocco animated the man and I animated the plants. There are no colours, apart from some greens the film is black and white. A lot of my clients today want me to paint them the plants from the film.

And how did he come up with the idea of the film?

(laughter) I’d rather not disclose that information.

The theme is very ecologically oriented. What do you think of the current situation, the emissions and the climate change in the world?

I think that we are at a very desperate moment. I know that in Italy we don’t do anything to improve the ecosystem. In other parts of the world, USA for example, the situation is even worse. The Netherlands, and Slovenia also, are much better in this sense. I think that Italy is the worst in Europe.

Why do you think so?

I think that Italians are very lazy. For example, we don’t cycle enough, we drive our cars everywhere we go. 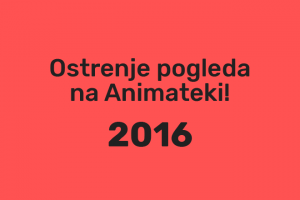